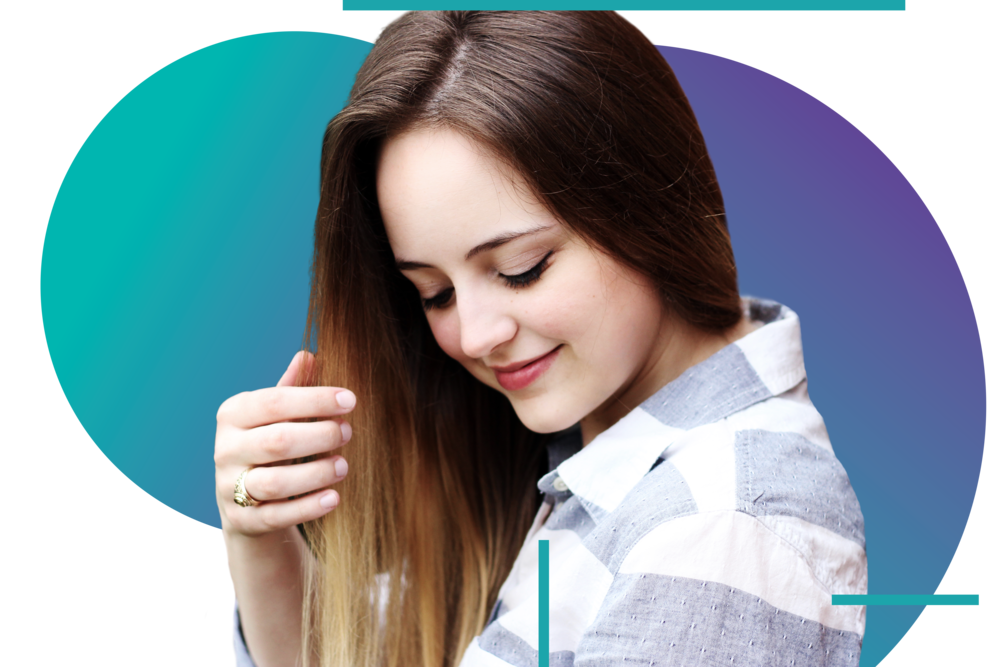 Lindsay runs a design agency called Alera Design, and she approached me last year after finding an article I wrote on my old site, Nerve 10. The article was about my plan to write a mental health poetry book.

She, inexplicably, offered to design my book cover--FOR FREE.

I didn't know what to expect. I get a lot of emails and requests  from all kinds of people, and most aren't well thought out. But there was something different about Lindsay.

And the more I learned about her, the more I realized just how impressive she really is--and I'm not just talking about her phenomenal design skills that she uses to help her Alera Design clients.

Dealing with mental health issues herself, there was something about my writing that really resonated with her. She's had navigate mental health challenges within her family, as many of us have.

It hasn't been easy for her, and I have a feeling her family and personal struggles have made her the person she is today.

Yes, I'm so happy with how the cover for In Search of Happiness: Healing Through Mental Health Poetry turned out.

Beyond that, I'm happy to now consider Lindsay a friend. The world's better with her in it.

We Learn to Adapt in Order to Survive

It wasn’t until I went off to college that I discovered I’d been wearing a mask most of my life—and that it could be removed.

I realized I could take a full breath of air for the first time, and it was a strange sensation.

It’s still a bit confusing to look back on. My childhood seemed fine—I was an only child who was constantly doted upon. But emotionally, my inner world was a silenced, suffocating storm of turmoil that was trapped and hiding behind the mask glued to my face. I wasn’t aware of its presence because of how tightly constrained it was, thanks to my adolescent oblivion and adapted survival behavior of freezing and fawning.

But my body had had enough, and I finally, forcefully, ripped the mask off and, in the process, took off a few layers of skin. It was time for me to understand and come to terms with everything, and if I mentally hadn’t reached that point, then maybe a physical manifestation of pain would get my attention. That chronic pain began 6 years ago: along with fibromyalgia, I was diagnosed with depression, anxiety, and C-PTSD.

In essence, I was my mother’s therapist and emotional support throughout my childhood.

This enmeshed parentification along with guilt manipulation, gas-lighting, and other forms of psychological and emotional abuse were the silent chokers of my freedom.

I was always trying to make her happy, and I believe out of this motivation grew my perfectionist complex and resulting anxiety.

Boundaries weren’t a thing in our household, not caring about barging in while one of us was on the toilet or in the shower, just to talk. I became afraid to ask her permission to go out and see friends, because of her cold, curt behavior towards me after asking.

Now I can see it was jealousy. She’d blow up at me and hours later come apologizing, explaining that this was some kind of reactionary shield she built from my stepfather’s mental abuse to her before they were married. While that may be true, it was confirmed later by her estranged sister that my mother has always been manipulative and always avoided blame. It likely developed during her difficult childhood—after all, trauma breeds trauma.

We were supposed to go to therapy together, to see a psychologist she picked out who had 30+ years of experience. However, she backed out the night before, freaking out because I suggested we take separate cars. Turned out, it was good that I went alone, as I was able to actually talk and explain my experiences to the therapist. Later, I convinced my mother to come in with me a couple of times, all of which went terribly. The psychologist confirmed to me that my mother was borderline, narcissistic, and codependent. We were enmeshed, and I needed to work on setting boundaries with her.

That was three years ago.

Looking back, I’m pleasantly surprised by how much I’ve healed throughout all this—and also frustrated that I haven’t healed more.

I’ve learned that healing is a long process and it’s in no way linear. It’s an up-and-down roller coaster with so many loops, you feel as if you’ll surely get thrown out of your seat.

I’ve learned that space, and having minimal contact with your abuser, is incredibly helpful and absolutely needed for optimal healing to occur. I’ve learned that group therapy is wonderful, and it’s both sad, yet validating, to hear other people going through similar experiences.

I’ve learned that boundaries are very important, not only in limiting other people, but primarily for you to hold enough space for--and to respect--yourself.

I’ve learned that it’s easy to get sucked back into the black hole of suffering, dwelling, anger and grief, and that that causes self destruction. The layering of it all eats away at you, but the attempt of forgiveness can help at setting yourself free from that destruction.

I’ve learned that while peace is hard to come by, it’s still a slow, ever-present transformation.

I’ve learned that sometimes you don’t notice what’s happening to yourself and that you need an outside perspective.

I’ve learned that telling your story aids in healing—in accepting what’s happened, learning from it, and letting it be.

Finally, I’ve learned that it helps to shift your focus to the present and the wonderful possibilities of new beginnings, sweet friends, and knowing we’re never alone in this journey.

My Top 5 Mental Health Lessons For 2021
"Why Am I So Depressed?" 3 Relatable Answers You Need to Know
"I Don't Care About Anything" - Anhedonia is the Answer
Holiday Stress (9 Sanity-Saving Strategies That Work)
"My Life Is Over" - 3 Big Reasons It's Not
3 Time-Saving Principles to Make Someone Leave You Alone
Feeling Stuck in Life? 4 Huge Reasons Why (With Solutions)
How To Help With Depression (For You or Your Loved Ones)
Mentally checked out? Think like a tree.
Pretending To Be Happy? (3 Dead Giveaways)
"Am I Unlovable?" Cope Today With Feeling Unlovable
Anxiety Action Plan - Beat Your Anxiety With This Simple Approach
I Wrote This Mental Health Book For You
How to Relax Your Mind From Stress (3 Easy Steps)
How to Get Rid of Bad, Stress Coping Mechanisms
3 Positive Mental Health Poems From My First Book, In Search of Happiness
How to Get Out of a Mental Rut Today - 3 Powerful Methods
My Story - How I, Jordan Brown, Got Into the Mental Health Field